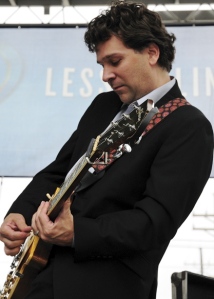 I am an anthropologist of music living in New Orleans and teaching at Tulane University. In my book, Roll With It: Brass Bands in the Streets of New Orleans, I follow brass band musicians as they march off the streets and into nightclubs, festival grounds, and recording studios. Keywords in Sound, co-edited with David Novak, is a collection of twenty entries on sound written by leading scholars in the field of sound studies. I also write essays and occasionally produce public radio pieces on New Orleans culture. At Tulane, I teach courses on a variety of topics ranging from classical music to New Orleans music.

I was born in Worcester, Massachusetts, attended Peabody Conservatory in Baltimore, and worked as a sound engineer at the Smithsonian Institution. I moved to New Orleans in 1997 and became the co-producer of the public radio program American Routes. I received my PhD in ethnomusicology from Columbia University in 2008 and I am now Associate Assistant Professor of Music at Tulane. My work as an anthropologist is based on engagement with everyday New Orleanians on issues of social justice.

Other things I do:
I am a board member for the Dinerral Shavers Educational Fund.
I volunteer with the Roots of Music afterschool program.
I am helping Bennie Pete write his book for Neighborhood Story Project.
I am the bandleader and guitarist for Los Po-Boy-Citos.
I have a blast backing musicians at the Ponderosa Stomp every year.
I am the father of an amazing kid.